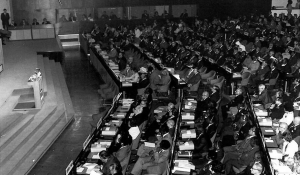 The 16th November 2019 marked the 47th anniversary of the World Heritage Convention. This Convention protects the world’s most outstanding places. The idea of creating an international movement for protecting heritage emerged after World War I. The 1972 Convention concerning the Protection of the World Cultural and Natural Heritage developed from the merging of two separate movements: the first focusing on the preservation of cultural sites, and the other dealing with the conservation of nature.   More under the UNESCO site